I’m glad to report that the first day of sampling on St Lucia was a great success – in fact, far more successful than we expected!

After enjoying our breakfast on the terrace, George (my co-supervisor and companion for the trip) and I struggled through the noisy Caribbean traffic towards the northernmost part of the island. Our aim was to collect samples of mafic lavas from the first stage of the island’s formation, estimated to be around 15-18 million years ago, and to search these outcrops for any cumulates they may contain.

Our first port of call was the well exposed sections below Fort Rodney (locality shown below). Here we collected two mafic lava samples, from the lower pyroxene containing flows and the uppermost amphibole and plagioclase rich flows. A walk further west then yielded the first cumulate samples of the trip! These were found in unusual reworked volcaniclastic deposits that appear to be interspersed with the mafic lavas. These deposits may represent reworked material from explosive eruptions occurring at the same time as the effusive magmatism. 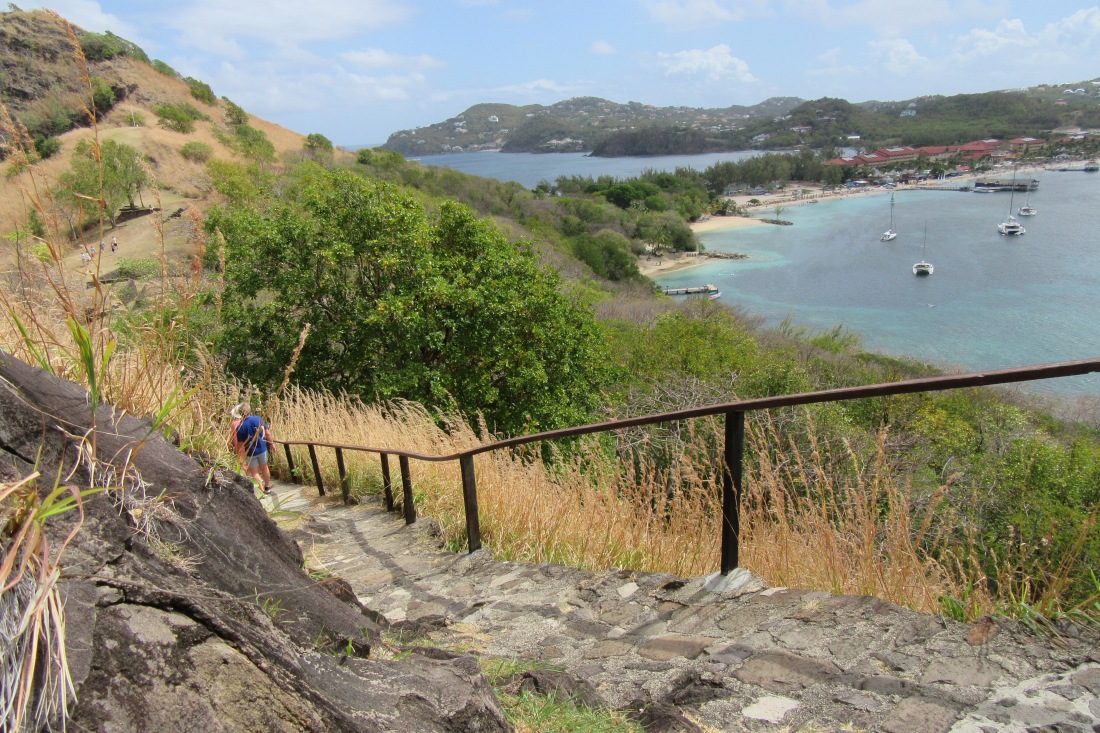 After rewarding ourselves with lunch by the sea, we took a detour to look at the outcrops on either side of the small bay known as Smugglers Cove (see below, photo looking towards the northern side of the bay). The rocks here are mostly volcaniclastic and conglomerate deposits, from the same initial phase of the island’s formation. 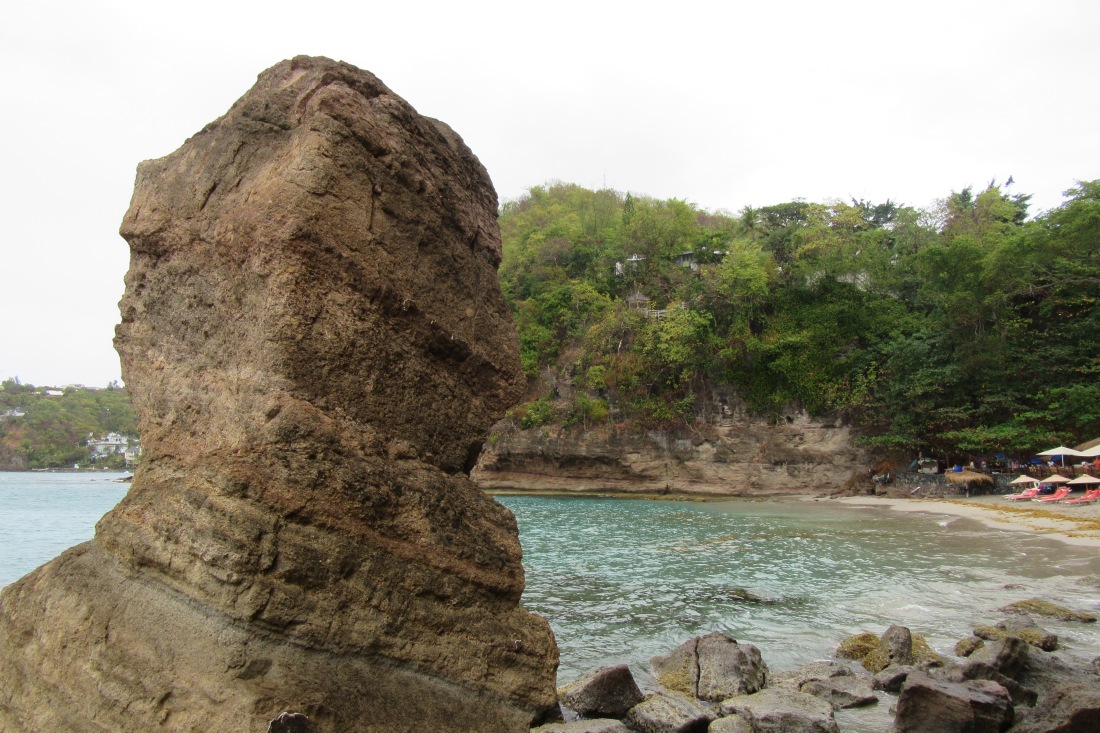 On closer inspection, these were found to contain an amazing amount of cumulates, leading us to collect the hoard in the following photo.

The cumulates found were typical of the Lesser Antilles, dominated by amphibole and plagioclase crystals, though a couple also contained olivine or pyroxene as an additional phase. One of the lower volcaniclastic layers on the northern side of the bay contained so many cumulates it was impossible to sample them all – you can see three in the photo below! We are hoping that these samples will provide useful information about the processes occurring in the crust prior to eruptions that contributed to the island’s formation, and how these differ to later events on St Lucia. 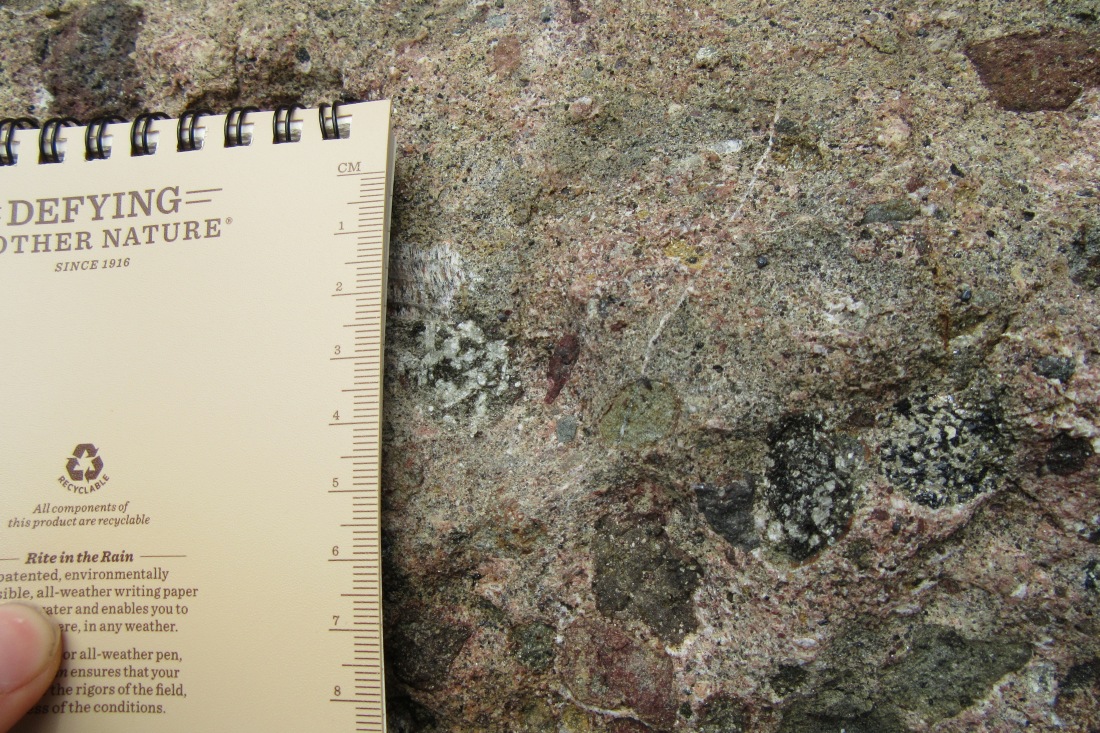 The day was rounded off successfully by finding cumulates within the lava flow units exposed at the southern end of Rodney Bay, which will allow us to study the relationship between them and their host magmas on St Lucia.

That’s all for day 1, here’s hoping that tomorrows locales down near the scenic Pitons can live up to today’s finds!

PhD student at Durham University, on a NERC IAPETUS funded studentship studying geochemistry of volcanoes in the Lesser Antilles arc. Further details can be found on my profile page here: https://www.dur.ac.uk/earth.sciences/staff/postgraduates/?id=17567 View all posts by Josh Brown

Keep up with the Durham Earth Science department on Twitter